August 21, 2013 – This summer marked the start and completion of numerous improvement projects aimed at enhancing student academic and residential life while evolving the university’s presence in downtown Washington, D.C.

More than 20 construction and renovation projects took place this summer, with many of them specifically designed to improve current living space for students on campus.

The projects also include the start of construction for the new Healey Family Student Center in New South Hall; the finishing touches of a new downtown home for the School of Continuing Studies (SCS); and the near completion of the Calcagnini Contemplative Center in Bluemont, Va.

“From large projects such as the completion of the new home for SCS on Massachusetts Avenue to the initiation of the Healey Family Student Center to smaller efforts such as classroom upgrades, sidewalk and residence hall improvements, our summer accomplishments represent a balanced and collaborative approach to improving the living and learning environment at Georgetown,” said Robin Morey, vice president for planning and facilities management.

Also in the works are the interior and exterior renovations to Dahlgren Chapel, scheduled for completion in January 2014, and classroom and art studio renovations in Walsh and White-Gravenor.

The Healey Family Student Center will feature gathering spaces designed for an increasingly residential campus – including a pub, dance studios, a food service area run by The Corp, and meeting, social and study spaces.

A dramatic south terrace overlooking Prospect Street and the Potomac River is another highlight of the new center.

“When completed, [the center] will represent a critical component in our efforts to make the Hilltop a living and learning environment,” Morey said. “With the addition of over 46,000 square feet of student space, we are creating on environment where students will want to stay on campus to meet their educational and social needs.” 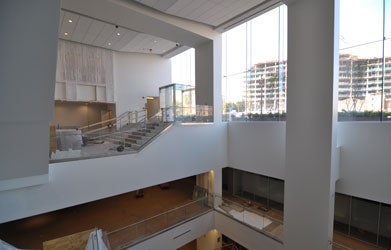 Construction is also winding down on the new School of Continuing Studies (SCS) home at 640 Massachusetts Avenue in downtown Washington, D.C., where SCS students will begin their classes this fall.

SCS’s new downtown location builds on the foundation set by Georgetown University Law Center, which is located just a few blocks away from the SCS site at 600 New Jersey Ave.

“[The new space] provides an outstanding venue at a convenient location for our students to access educational programs to facilitate their professional studies,” Morey said.

The university also made progress renovating its Magis Row townhouses.

“The completion of the Magis Row townhouse renovations allowed us to relocate 65 undergraduate students from the community back on campus,” Morey said. “This project is in keeping with our campus plan commitments.” 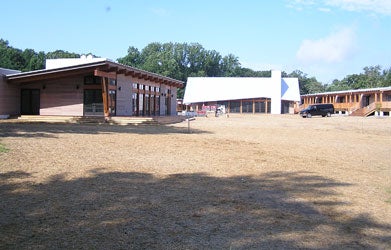 The Calcagnini Contemplative Center in Bluemont, Va., will host the Office of Campus Ministry’s retreats.

Outside of Washington, D.C., construction crews are putting finishing touches on the Calcagnini Contemplative Center in Bluemont, Va., which will be home to the Office of Campus Ministry’s retreats for Catholic, Protestant, Jewish, Muslim and Orthodox Christian students as well as those who practice other religions.

When complete, the center located in the Blue Ridge Mountains will include a Catholic chapel, a common green area, community and dining halls, a caretaker’s house and 28 cabins.

The center is being built with a $17 million gift from Arthur Calcagnini (C’54) and his wife, Nancy.